Here are a couple of drawings from yesterday and one from today.

Yesterday was 2 takes on the same source image Cooper’s hawk.

I like the first one better. The closely placed eyes are true to the little bird’s place in the raptor pecking order…

The second one didn’t quite work out line weight and “feel”-wise.

This one I like, it’s pretty dark and matches the coloring of the source image well.

Both source images were taken in Cape May during the fall migration.

Visiting Cape May is always fun.  In the Fall the birds migrate through by the thousands.
The flock of Black Skimmers are along the beach near the Arcade or west of there often. 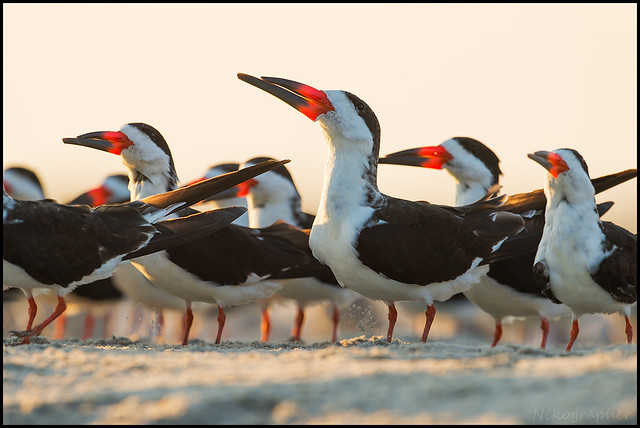 A storm passing at sunset made for a dramatic image. 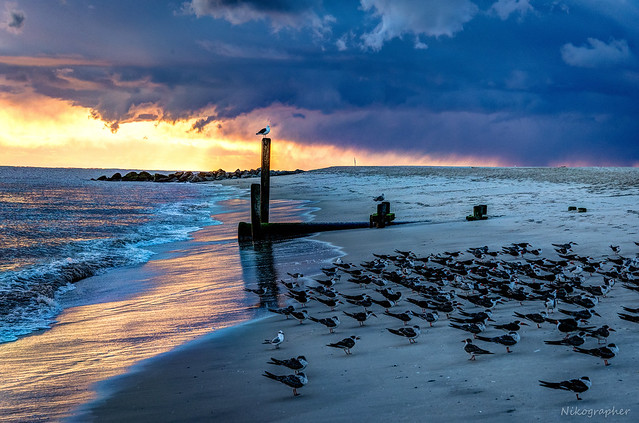 This tiny little turtle was crossing the path at The Nature Conservancy’s Meadows – I was struck buy his tiny form, and potential big future ahead – if he could survive the challenges and overcome all the obstacles. 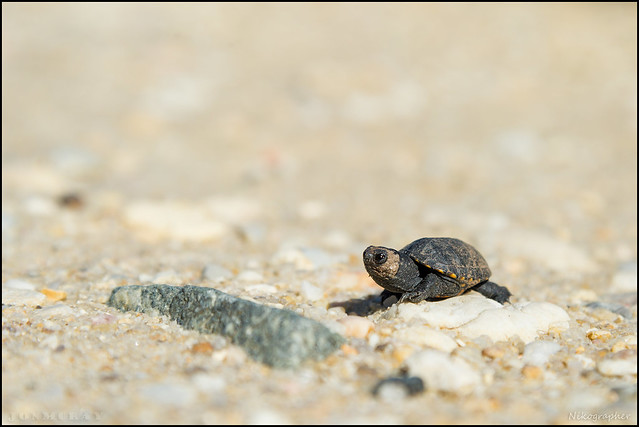 Another creature with challenges ahead was this young Osprey.  It was hunting for and catching small fish in the patch of ocean behind the meadows / east of the State Park. 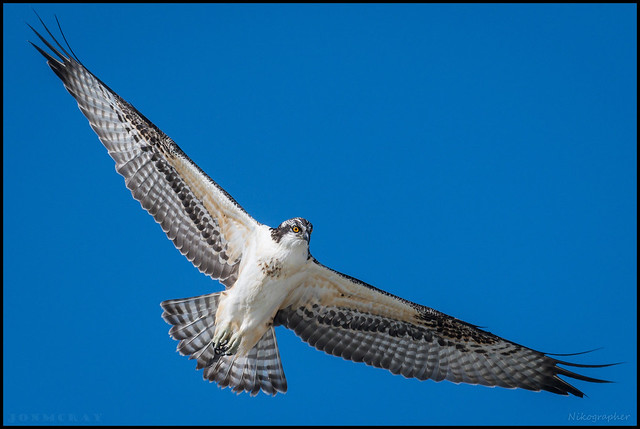 This image was pleasing to me – it shows the power of the ocean, the unity of the skimmer flock, their joint fate. 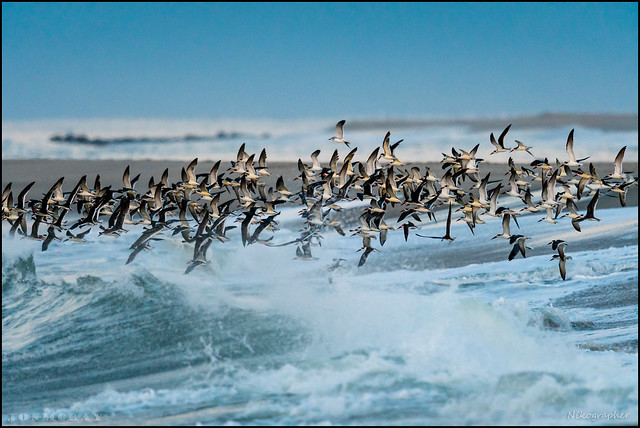 The hawk banding demos are good times to see the birds up close and some times get a good image.  This was taken on a Saturday at 11:30am at The Meadows where they do a demo / talk.  There are also demos at the State Park next to the hawk watch platform, on  Saturday and Sunday at 10am (roughly September and October). 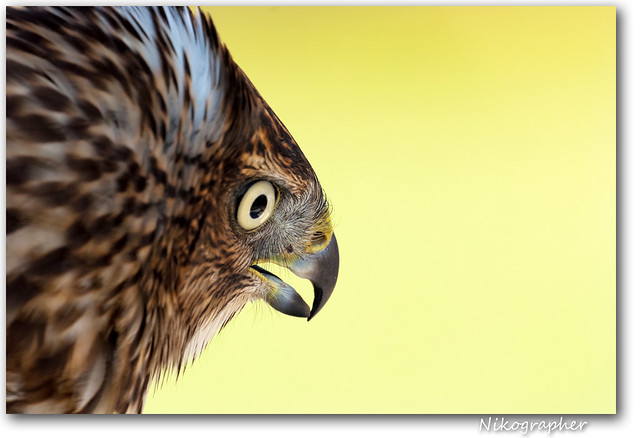 See more image in my Flickr set – Cape May NJ.

Photographing osprey is one of my favorite things to do.  Seeing the full cycle of returning from migration, nest building, mating, incubating, and then hatching, feeding and eventually fledging and utimately migrating again is so rich in animal behaviors and photographic opportunities.

This is one of my early images (2006), taken near Reagan National Airport from a boat.  I struck up a conversation with a local guy at the marina and he offered a ride some day, and I asked if we could do it right then and he said ok.  He had a small aluminum skiff. 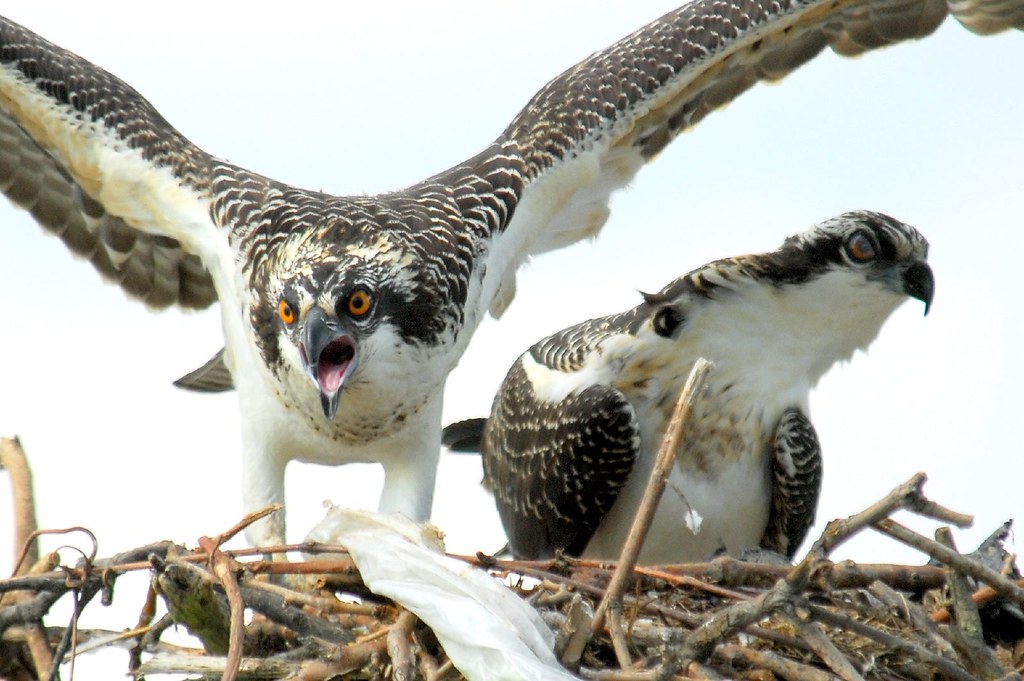 This is probably my favorite osprey image of all time (2011), taken at a private location where the nest is fairly close to land and the birds were relatively used to people being nearby.  So the adult female would chirp a bit and then be at ease again if I approached. 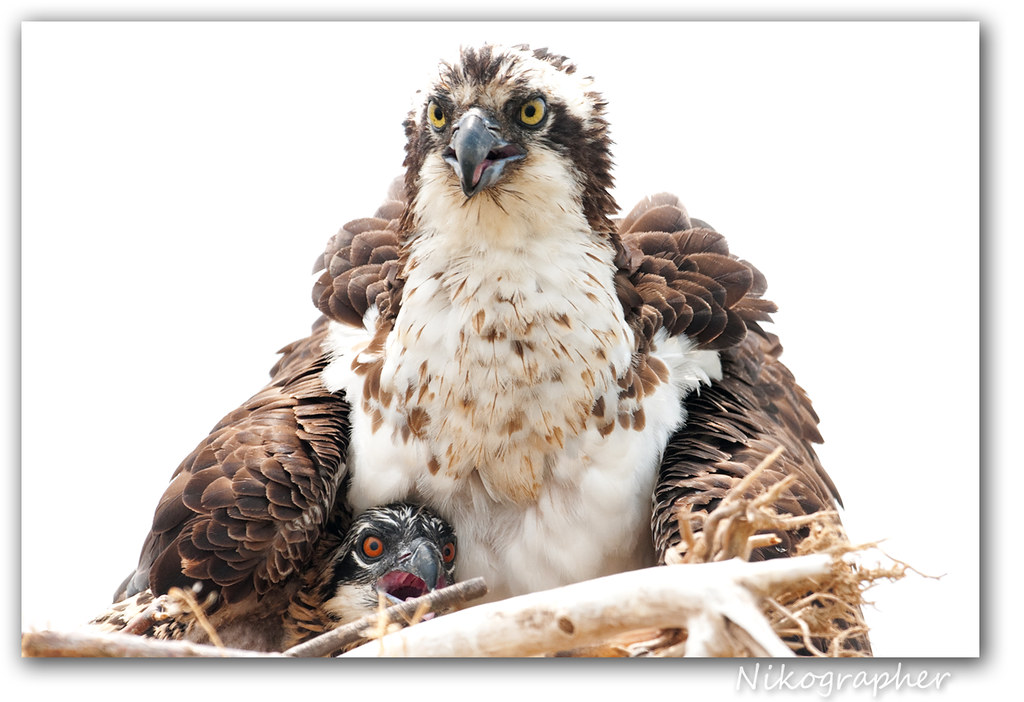 This image is from Maine (2011) at a great local secret spot. 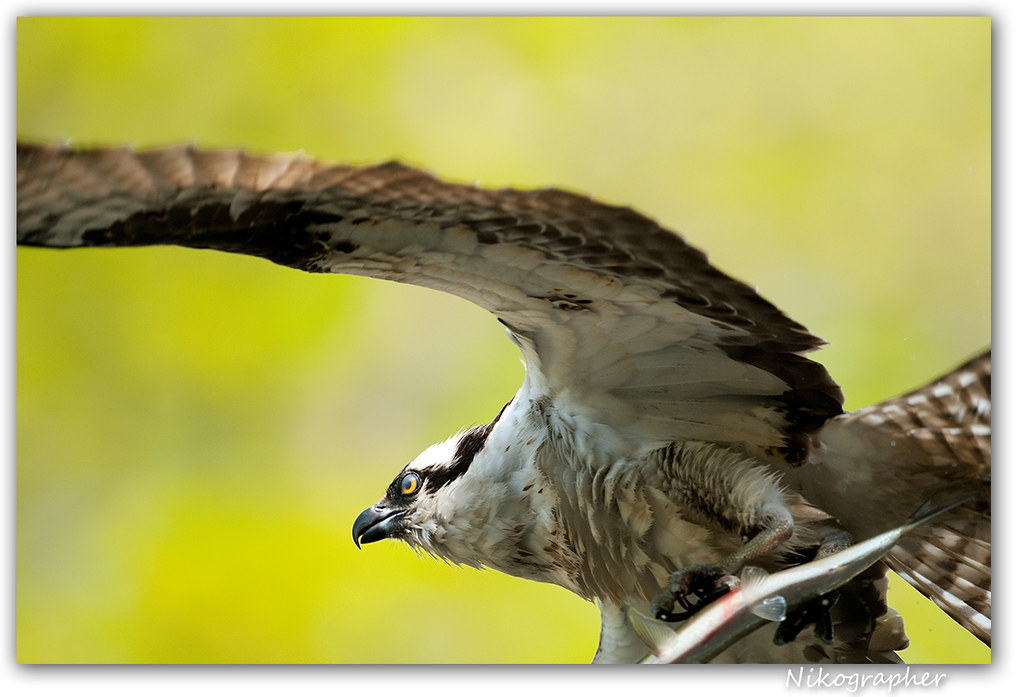 This one is from the same nest as my favorite image, where the female was feeding the 3 chicks (2011). I like how you can see all their eyes and the little chunk of fish being fed to the chick. 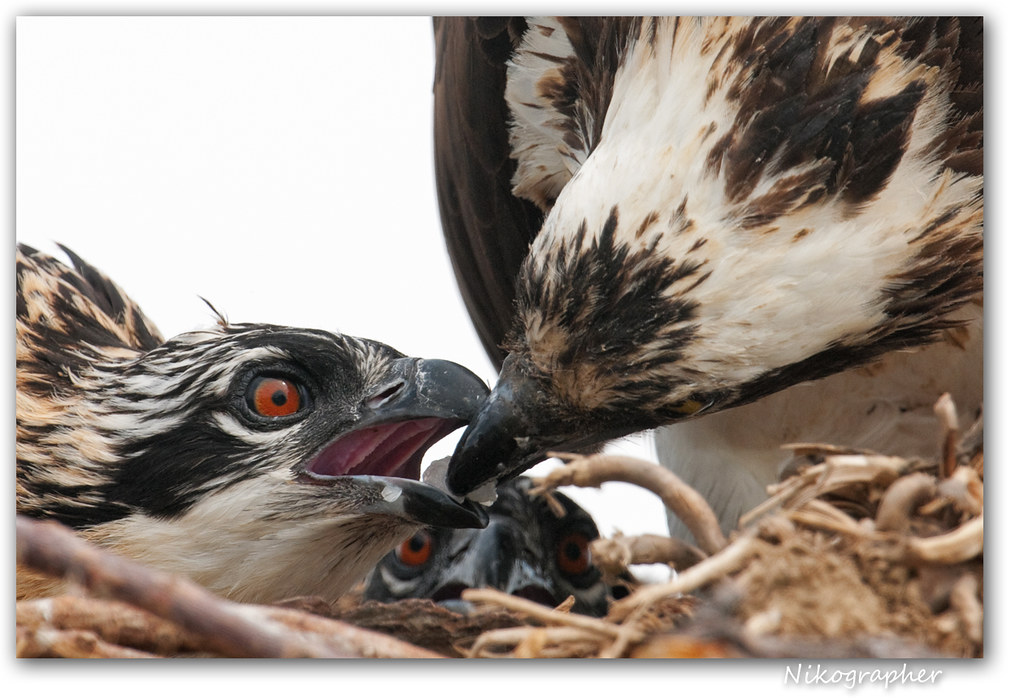 This is a migratory osprey seen in Cape May New Jersey in 2016.  I think the bird is so well lit due to the Fall sun angle combined with the sandy beach and light being reflected up. 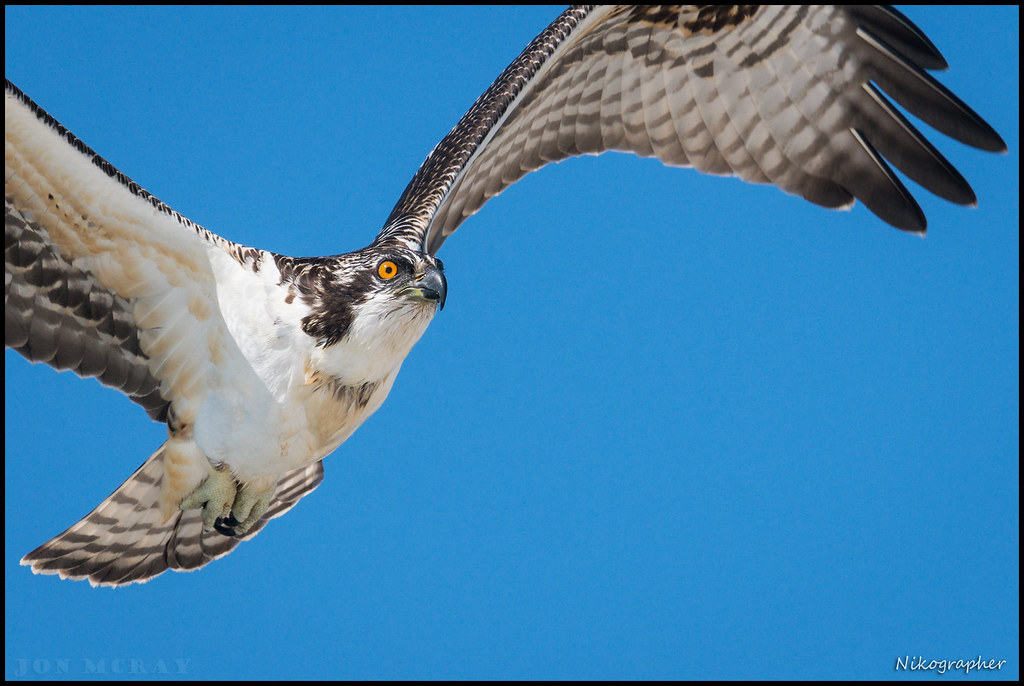 This back at my favorite spot and I love seeing the mom and chick sitting together in the nest. 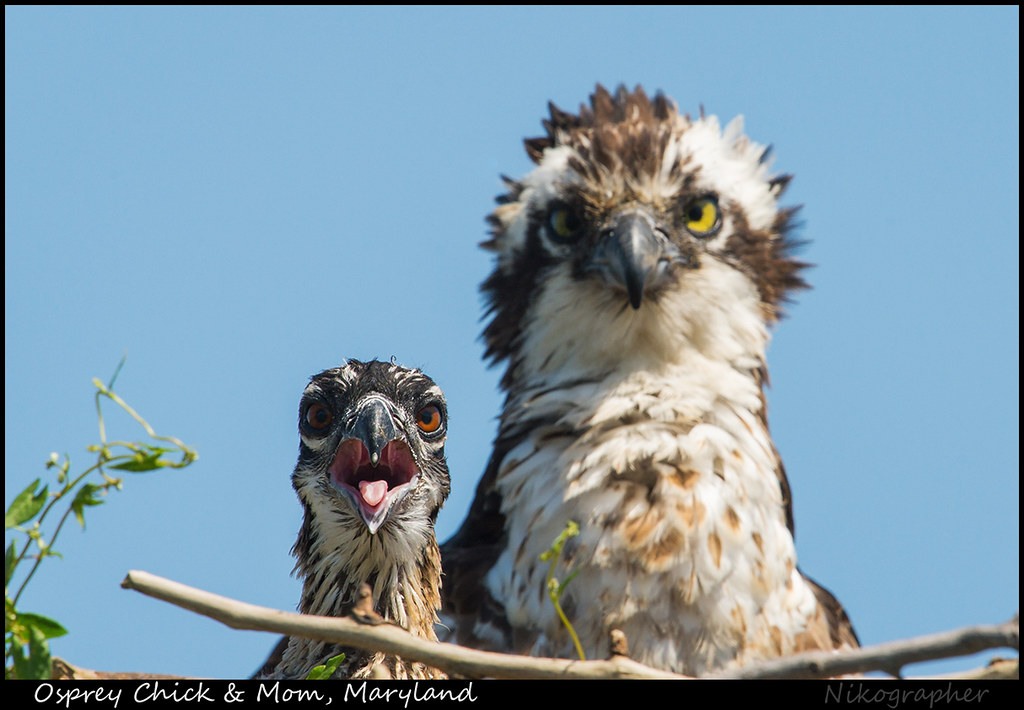 This image was unique to me, the first time I had seen this.  The osprey’s brood patch is visible, where she removed some feathers so she can better incubate the eggs. This is from near Annapolis Maryland. 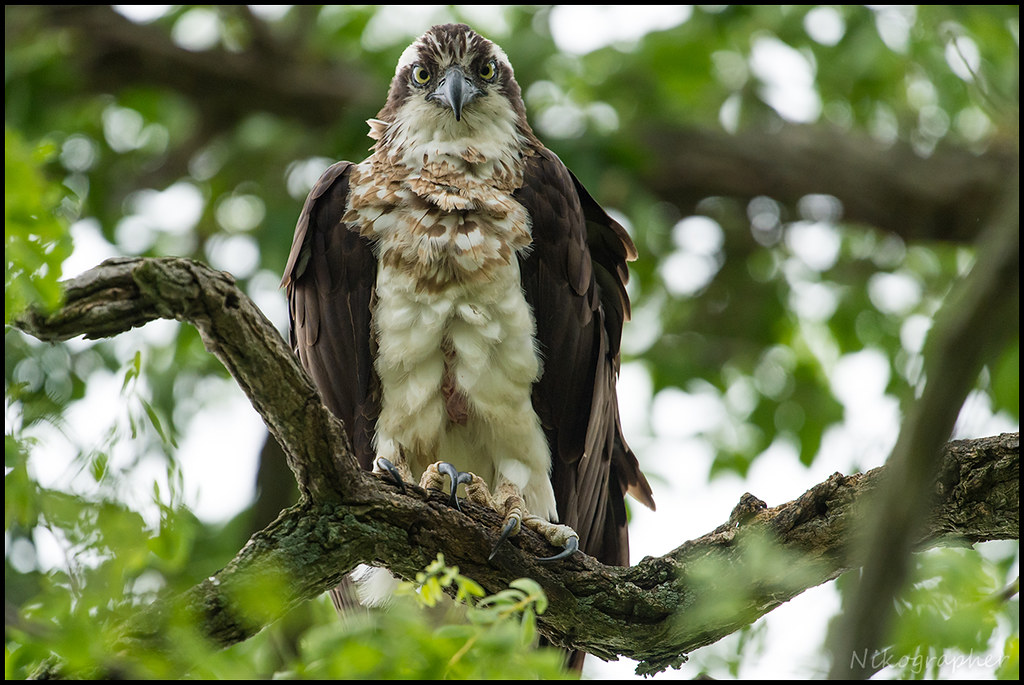 Finally here are 2 more nesting images from out by Easton Maryland.  Both are nests with chicks that are maybe going to fledge in a few weeks.

Wet mom (2012) returns to the nest, with chicks trying to be flat, and hidden. 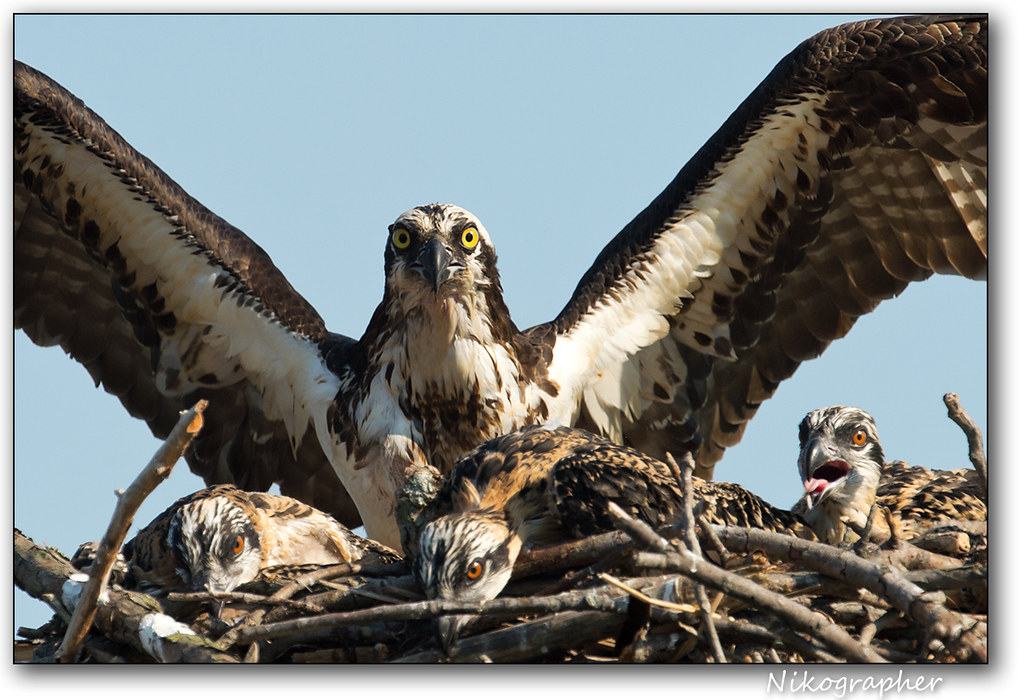 And lastly, an image I drove to a spot specifically hoping to see this shading behavior on a day that was 95 degrees or more (2016). 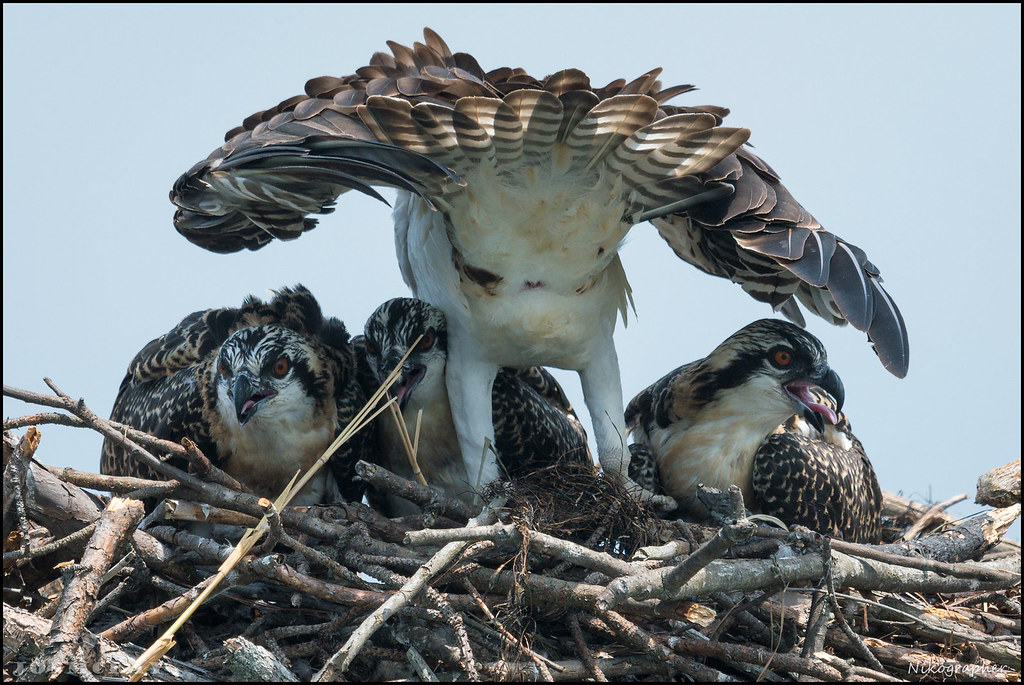